The Great Ocean Walk from Parker Hill to Point Franklin is a wonderful section of the Great Ocean Walk and if you are very lucky, as the sand doesn’t always give up its secrets too easily, you will discover the hull of Eric the Red as you wander onto the shores of Parker Inlet.

Where is Parker Inlet on the Great Ocean Walk trail?

You will pass this section of trail on the ‘Hike the Cape Walk’, or on most of our walks in fact, except the 4 Day Wild Side Walk (which starts from the Cape Otway Lighthouse). You can see the Lighthouse in the distance perched upon the clifftops as you leave Parker Inlet and make your way around the coast to Port Franklin and Crayfish Bay.

The walk from Parker Inlet to the Lighthouse is approx 4.5kms and as you approach the Lighthouse you get great views from the recently built staircase and boardwalk overlooking the hills and pasture on your right as well as the ocean on your left.

When and where can you see the Eric the Red wreck?

Due to the large swell that dominates the rocky coastline of the Great Ocean Walk a lot of sand washes into this isolated inlet, setting firm like a thick wet blanket. But very occasionally this sand is dragged away by the tides and if this happens to coincide with the timing of your Great Ocean Walk its so exciting to see the hull of Eric the Red rising out of the sand.

If the tide is low enough you might be lucky enough to actually touch the hull, which is kind of cool as this is one of Victoria’s major 19th Century shipwrecks. Unfortunately, whether you are able to see the wreck or not is just a matter of luck, as even low tide does not guarantee a viewing. But, if the sand has shifted, it is on the left-hand side of the inlet as you face the ocean and you may spot it by looking out for the bright green moss growing on the ribs of the ship.

Where was Eric the Red from and how what was its cargo?

Eric the Red, an American wooden ship, began her life in 1871 as a coal trader operating between Britain and South America and also traded between Europe and New York. On its last voyage, Eric the Red had been chartered to carry a full cargo of American merchandise from New York including a number of exhibits bound for the International Exhibition building in Melbourne. 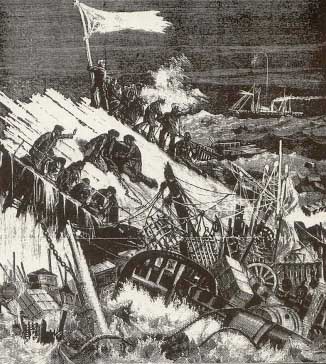 How did Eric the Red sink?

In 1880, at 1 am on 4 September Eric the Red went down.  Captain Jaques Allen, unfamiliar with the Cape Otway reef, unwittingly drew in too close to the shore and disaster struck.

There were 23 crew and two passengers on board when the ship completely broke up after striking the reef three times. What a tragedy after 85 days at sea and nearly making it to Melbourne with land so close!

Within twelve minutes most of the ship had disappeared leaving only its floating wreckage and cargo floating in the surf.

Three of the crew (the carpenter, the steward and one seaman) and one of the passengers (a man named Vaughan, who was traveling for his health and not very strong) were washed overboard and never seen again. Fortunately, the SS Dawn, a passing steamer, heard the distressed cries of the survivors clinging to the remains of the wreckage and dragged them from the ocean.

The Skippers Story, leaving him ‘black and blue’ and trouserless!

“The mizzen topmast fell with all the rigging…As soon as I found out there was no hope I said to Ned Sewell, the owner’s son, and the third mate on board “Stick to me, and hang on to this mizzen mast”.

I peeled off everything I had on except my drawers thinking I would be able to swim better without my clothes; and Sewell and myself, clinging to the mast, were washed overboard….It was a fearful sea; I have never seen anything like it”.

After losing young Sewell, Captain Allen struck out: ” my drawers got down my legs, and entangled them, and down I went. I managed to clear one of my legs and on coming up I managed to get hold of some floating timber…

…..Shortly after I got onto the wreck we made out the steamer’s lights, and as soon as she was within hearing distance the men halloed. This must have been about half-past four…… and at daylight, they picked us up off the wreck. We had drifted about four miles from the reef where the ship struck….

All those who were rescued were more or less bruised. One man had two or three ribs broken, and another had some fingers crushed off. My left foot is very much hurt, and I am black and blue from head to foot.

I never knew such a ten minutes as that of the wreck, and I thought the time had come for me to ‘hand in my checks’. The ship was worth about 15,000 pounds, and neither it nor the freight was insured one dollar”. (Argus 14/9/1880).

The rugged coastline on the Shipwreck Coast

Looking at these photos of the shoreline around Parker Inlet you can see just how rugged the coastline is and how frightening it would have been to be out floating in such huge swell waiting to be rescued.

Sadly, one body was found washed up at Cape Otway and was buried in the lighthouse cemetery. (You can visit the cemetery after you pass the Lighthouse itself, near the Cape Otway hike-in campsite). Another body was seen on an inaccessible ledge and never recovered.

The captain and crew of the SS Dawn received great thanks, medals, and rewards from the US consul for their lifesaving efforts.

The rest of the wreckage you can see on the beach

As well as the battered hull of the ship occasionally being visible, if you walk around the rocks at Parker Inlet you can see other remnants of the ship still scattered on the rocks, much of it rusting away.

Wreckage at Parker Inlet from Eric the Red

An anchor is on the rocks at Point Franklin although there is not much left of it, and a second anchor is on display at the Cape Otway Lighthouse.

Pegs from Eric the Red

The hull and cargo were sold for 410 pounds (the ship was worth about £15,000) and large rafts of floating wreckage and cargo washed up on the Victorian coast from Apollo Bay to Peterborough, some even as far as New Zealand. The cargo was reportedly worth £40,000 and only about £2,000 worth had been recovered.

How Apollo Bay used the wreckage of the ship

The residents of Apollo Bay and those living in the surrounding area were used to ships being wrecked in rough seas. Many locals were on the lookout for items found washed up and scattered on the beach, which were always gratefully accepted!

On this occasion however, some items in the wreckage were so valuable that looters went to a lot of trouble retrieving the goods and went as far as lowering themselves down the high cliff faces, where the beach was inaccessible, in order to reach some items.

Those who helped retrieve the goods for the owners were rewarded with silver coffee and teapots,  silver serviette rings and sewing machines.

It is said by locals that there was a trade in tobacco from Eric the Red for up to 10 years after the disaster, so the bales of tobacco headed for Melbourne brought much happiness to the town! One looter was actually prosecuted 2 years later for trading the tobacco.

Other parts of Eric the Red were salvaged and used in the construction or extension of houses and sheds around Apollo Bay. 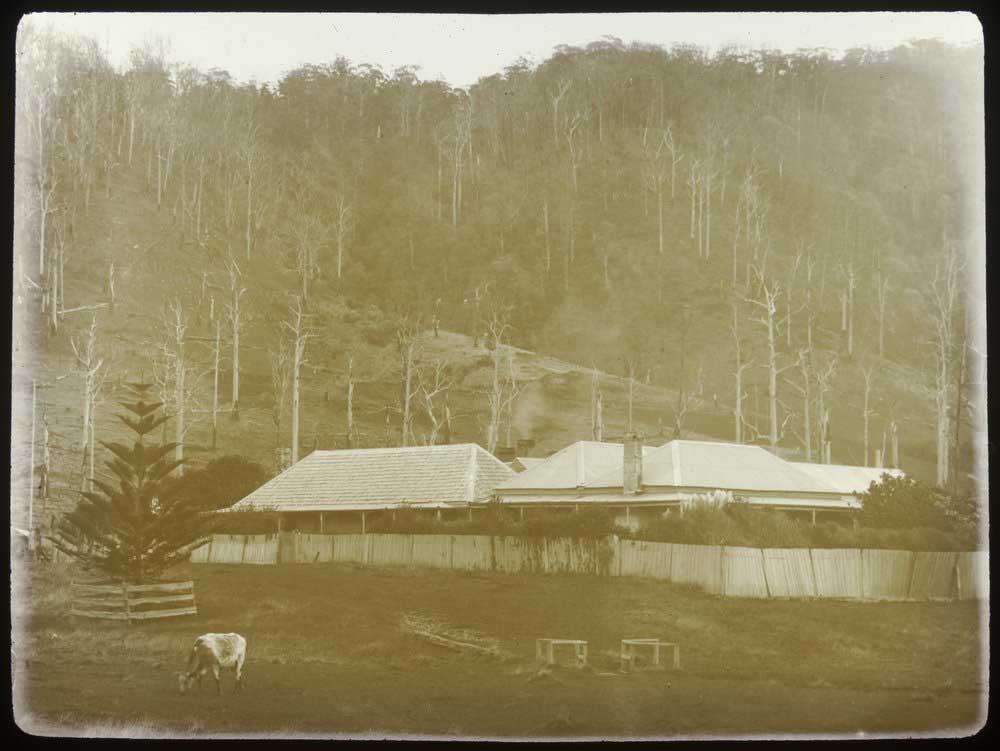 The most famous was Milford House built in 1870, which sadly burnt down in bushfires in 1934. The guest house owners were known for their great hospitality and would host important guests to the town who made good use of their ballroom floor; an extension added to the house, made out of Eric the Red’s timbers.

The guest house was also fitted out with furniture and fittings from the ship and its cabin doors made beautiful cupboards in the kitchen and the bedrooms.

Another house which still exists (which in recent years was moved to Marengo from Apollo Bay) was also built from much of the ‘Eric the Red’ wreckage. The studs in the house frame are made of American Oregon and the floors are made of 1 1/2 inch thick teak. For many years the kitchen roof was lined with canvas sails and kept the home wonderfully warm but made a horrible mess when the wind blew and the dust drifted down over everything!

The impact of losing Eric the Red

So there you have it! This one shipwreck made a big impact, from those who lost their lives, to the owners who never insured themselves (ouch!), to the lucky (and sometimes opportunist) inhabitants of Apollo Bay who benefited from the wreck. However, the biggest impact Eric the Red’s sinking influenced in the area was the change to the light at the Cape Otway Lighthouse in 1881.

This additional light would have saved the lives of many of those heading to Australia from foreign shores trying to navigate their way around our treacherous coastline.

For those interested in more of our local history, we have included some of these tidbits of information in our walking notes which we will email you to read before you commence your great ocean walk with us 🙂

And remember, for those booking self-guided accommodation packages, we meet you for a private walk briefing before you walk so we can answer any questions you may have in person before you start your walk.