The realignments and kms of The Great Ocean Walk | Walk91 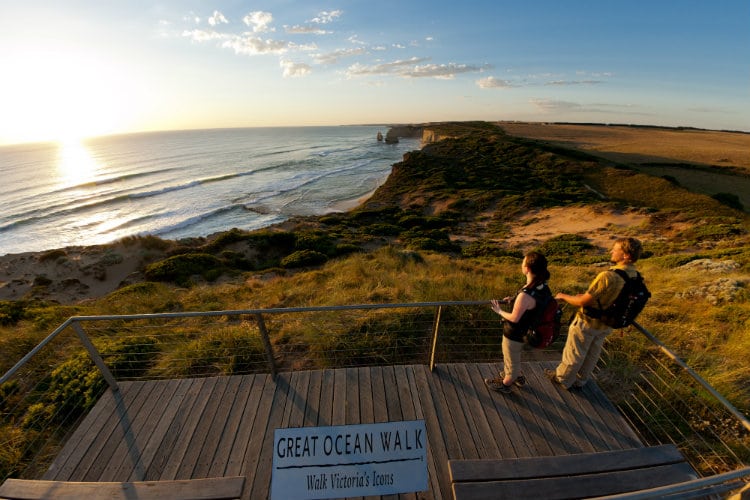 Since its creation in 2005, the Great Ocean Walk has become one of Australia’s most iconic walking experiences. The walk was born over a few red wines by some old Apollo Bay locals who loved bush-bashing through the Otways. They dreamed of joining together many of the secluded beach walks in the area with the old overgrown logging and fire tracks, never believing their crazy idea would lead to the creation of one magnificent walk which would soar to fame all over the world.

How long was the Great Ocean Walk when it first opened?

When the walk opened to the public in 2005 at 91kms long, Mark Kininmonth, a Park Ranger who helped build the trail, set up ‘Walk91’ to support those who needed local experience and help. 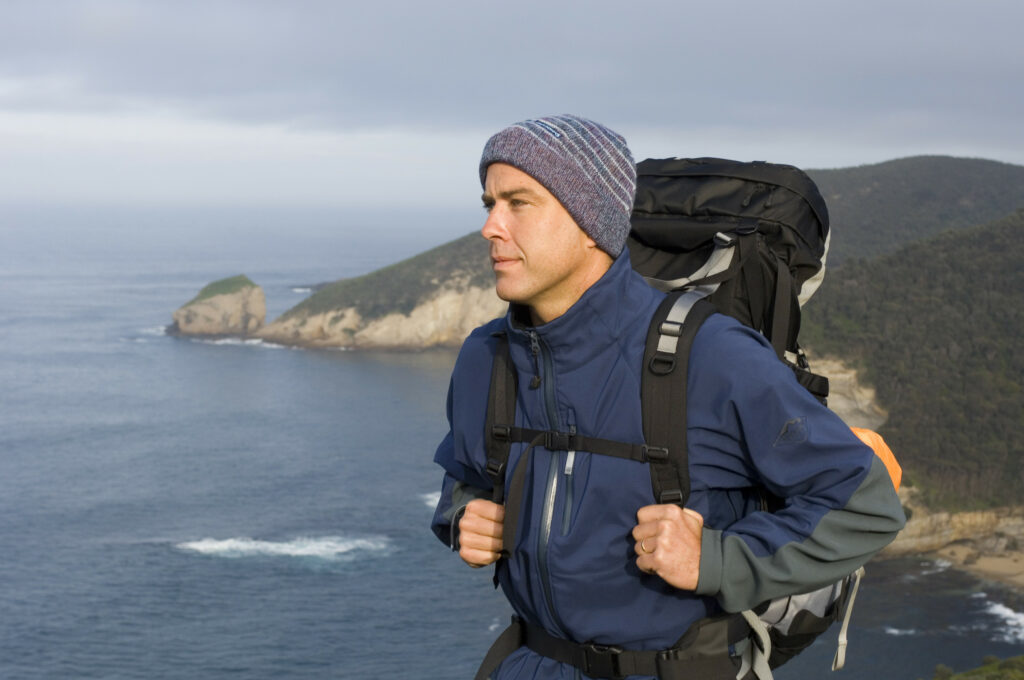 During the 16 years of planning walks for people from every continent, Walk91 watched in excitement as the walk slowly increased to 104kms. (If Mark had known that the walk was going to keep on growing he probably would have chosen a different name!) Most walkers comfortably walk the track in 6 days, but you can walk the Great Ocean Walk in 8 days, or the whole thing in as little as 4 Days if you are really fit!

Below are Mark and his wife Nancy in 2021 holding the old, and very first Great Ocean Walk sign, which has now been replaced by the newer trailhead. Certainly an improvement! The walk always started in Apollo Bay but ended at Glenample. Now the walk ends at the iconic 12 Apostles. 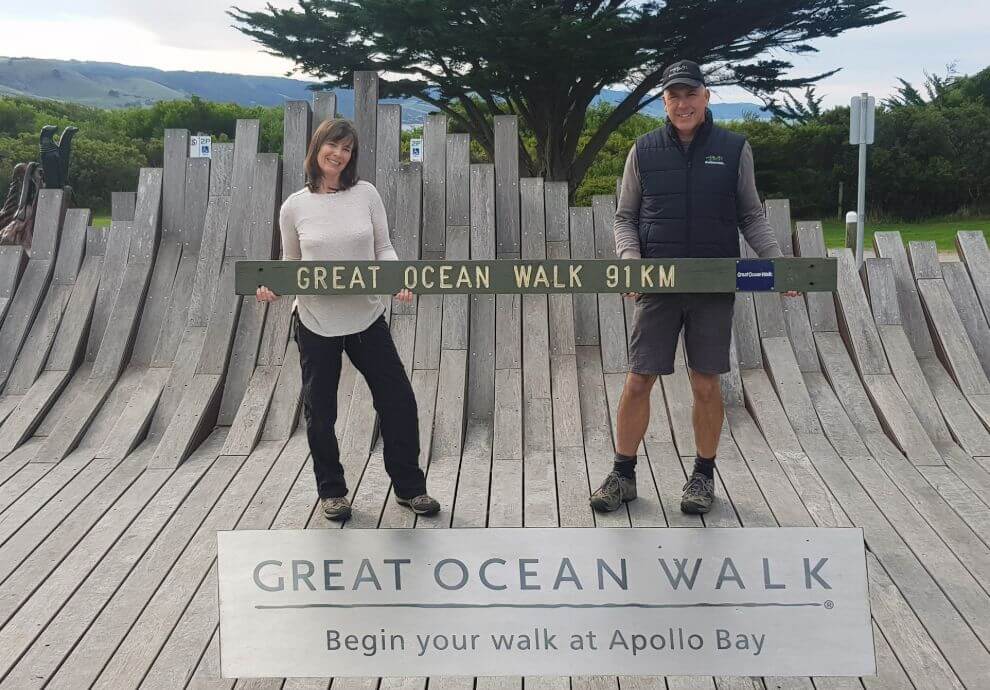 Camping spots for the Great Ocean Walk and ‘hike-in’ campground segments are as follows (and these are not all drive in sites – so don’t get them confused!):

The total distance to the campsites is 100km on the official Parks Victoria Map but once you have visited the lookouts and Rainbow Falls you walk approx 104km +. If you chose to stay in accommodation with Walk91 along the trail we custom-make the walking legs to suit you, so that the days walk end points are as close to the track as possible.

The alignment of the Great Ocean Walk when it first opened

The alignment of the Great Ocean Walk was designed after extensive environmental, cultural, geotechnical, risk and cost investigations spanning over five years. The alignment was based on the tracks already established along the route and it took hundreds of hours of fieldwork before work on the track could commence. Once the route was approved, 1km of informal tracks were closed and rehabilitated around Station beach to protect sensitive cultural sites and sand dunes.

Before the track opened, 22km of new walking track was built over 3 years by expert track builders and at least 25km of the track previously built was cleared. The track crews spent over 100 nights camping out in and nearby the park.

They built the track along with help from Parks Victoria Rangers (this is where Mark Kininmonth got to pick up tools!) Nearly the whole Great Ocean Walk at this time was constructed by hand with basic tools such as mattocks, shovels, and crowbars. Hard work!

Conservation Volunteers Australia also helped with the construction and land clearing, as well as international volunteers, Greencorps, Deakin University, and the Regional Employment and Education Program. So, it took an amazing group effort to create this fabulous walk.

At least 1200 rock steps, some weighing over 300kg, were laid in the newly built sections of track from imported local stone.  Two flights of 45 steps were constructed at Ryans Den and 7 flights of 131 steps at Cape Volney and many stepping stones and small rock bridges were created to cross rivers, streams, and creeks. A timber bridge was also built across Cape Volney.

A lot of timber was also used along the track, carried in by hand and with power carriers, and fallen logs were repositioned and re-used as boardwalks. Harnesses were used where necessary for the crews to access steep areas and any disturbed land was revegetated with indigenous species.

The potential spread of Phytophthora cinnamomi was a real concern so hygiene stations were also built along the track. Phytophthora cinnamomi is often difficult to detect and is a plant pathogen that spreads easily, causing disease and potential extinction in some plants, and loss of habitat for animals. It can remain dormant in dry weather for long periods and it is virtually impossible to eradicate from infested areas. so it is critical to prevent further spread. So, please stop and use the cleaning stations when you see them by cleaning your boots in the solution provided.

Glenample to the 12 Apostles realignment

The walk originally ended at Glenample Homestead, which was a little bit of an anticlimax at the time. See photo-

A viewing platform was later built at Glenample, which is now a great spot to see the 12 Apostles sitting impressively in the distance. Don’t miss the post provided where you can rest your camera to take great selfies! 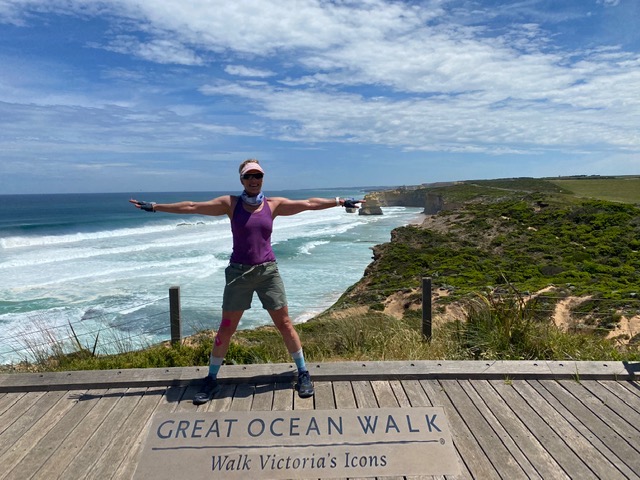 Can you walk to Port Campbell to the 12 Apostles?

Please note that some walking companies say that you can walk to Port Campbell. You can’t! There is no track and you would be walking along the side of the Great Ocean Road which we would not recommend. It is far too dangerous with the traffic that moves at high speeds along this popular road. We suggest to our walkers that we pick them up and drive them to Port Campbell (with their luggage) which takes around 15 minutes by car. (There is plenty of accommodation in Port Campbell if you want to stay there the night).

However, there have been discussions within Parks Victoria to extend the track to Port Campbell which would be great, so fingers crossed this will happen one day 🙂

If you would like any further information on the walks we offer, or you would like a chat about which of our walking itineraries would suit you best, please don’t hesitiate to contact us.