The Otways and Australia’s separation with Antarctica

The Otways coastline has been exposed to the relentless Southern Ocean swells, high orographic rainfall and the churning of deep-sea swells for millions of years. Prior to this, geological movement after Australia’s separation with Antarctica has caused significant changes to the landforms you can see today.

You can explore all of this fascinating landscape over 7 Days Walking, or enjoy the highlights in as little as 3 Day’s. However, no matter how much time you have to meander through the magnificent varying landscape of the Great Ocean Walk trail, Walk91 are always close by to support you on your journey.

Aboriginal tradition in the Otways

Aboriginal tradition teaches that a landscape’s geomorphological features are the work of ancestral spirits. More recently, western science suggests the Otway formations were heavily influenced by the movement of Australia during separation from Antarctica. Contrary to popular belief, the area was not subject to much volcanic activity.

Over 65 million years ago, during the Early Cretaceous period, the Eumeralla formation was developed. This is a layered bed of sedimentary materials including sandstone, siltstone, mudstone and mud-clast conglomerate; developed over years of deposition as sea levels rose and fell. This is the foundation for what you can see all around you today, the amazing Otway Ranges.

Ridgelines of the Otway Ranges

During the Heytesbury Group deposition period (29-5Ma) the Australian tectonic plate and Pacific tectonic plate collided. The collision caused compression of the landscape from the northeast and southwest corners and the Eumeralla Formation was uplifted and folded. (Just imagine if you squashed a block of playdough between your hands and it buckled several times in the middle!)

These folds became the mountains of the Otway Ranges. If you look closely at a map of the area you will notice the north-east trend of the ridgelines, or more technically ‘anticlinoria’ (top end of a fold in the landscape) resulting from the direction of this compression.

History in Action at Hopetoun Falls

More recent history has subjected these anticlines to erosion from southeast Victoria’s harsh weather conditions. Alluvial, or sedimentary, valleys have formed as water has drained off the ridges, collecting in low points and then moving towards the ocean, carving away at the landscape. In sections where the rock is harder, waterfalls have formed as the water is not able to gorge a clear channel like in the softer sedimentary rock materials. This can be seen at any number of locations including Hopetoun Falls, where the river cascades over hardened rock before continuing to flow downstream towards its exit from land at the Aire River mouth.

The age of the Eumeralla formation is directly represented through the rounded, rolling hills of the Otway Ranges and their lack of height in comparison to other mountains around the world. The average elevation of these hills sits below 500m. Many years ago, it is likely that they stood much taller before the wind and water eroded the landscape down.

As you walk through the Ranges, stop and take a thoughtful look around you. It is breathtaking to think about how long these hills have been standing for, and the enormous forces that must have acted to push the earth up into these shapes.

The remarkable nature of how these ranges were formed can be seen as you hike along the coastline. As the layers of sediment were laid down to eventually make the Eumeralla formation, mineral carbonates accumulated. These have formed spherical ‘pebbles’ embedded in the rock. Referred to as ‘artillery rocks’, these structures are astonishing to look at in sections where the softer surrounding rock has eroded away.

The honeycomb shapes which extend through most of the coastal rocky outcrops of the Otways are also a unique feature of the area. Rather than a dramatic flow of lava, these rocks have actually been subject to the relentless erosion of salty waves splashing against the rocks.

During the day, the water dries leaving behind salt crystals. These wedge themselves into the microscopic rock particles and slowly cause that spot to be opened up and continually worn away.

In some places where large sections of the bedrock have been exposed, such as at a cliff or where a road has been cut, you can see layers of rock. This is the sedimentary rock which is the Eumeralla formation. Often these layers are on an angle, a result of the folding and uplift which has changed the landscape from being flat to the hills we see today. 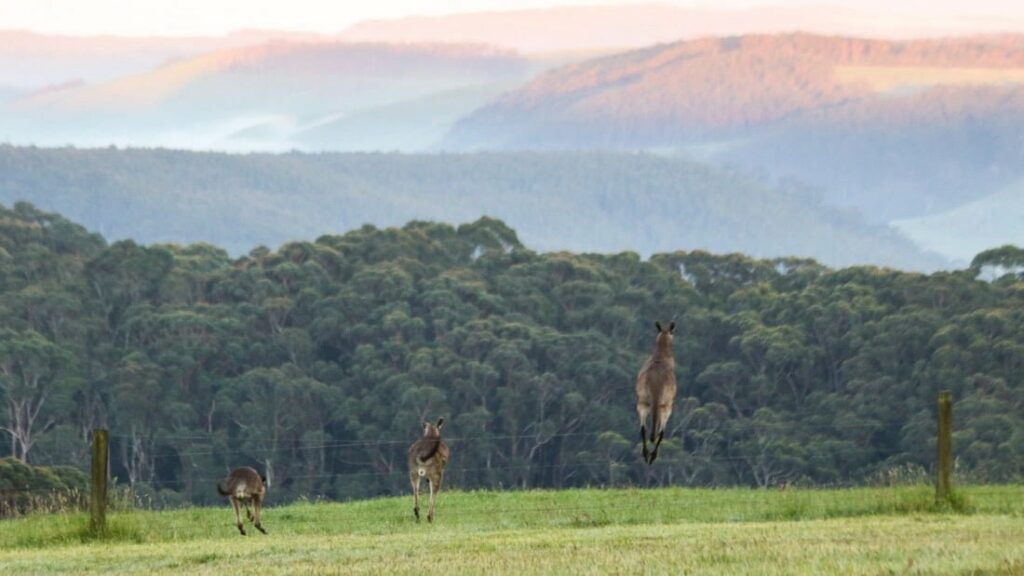 We hope this info has given you a tiny insight into the amazing geology of the Great Ocean Walk.  Remember that whilst you sit back on a rock or two and rest your tired hiking legs, you really are lucky enough to be sitting on a fascinating part of Australia’s Geological history. Relax, and take it all in! It was a long time in the making 🙂